A few weeks ago, I went into a convenience store and on the counter is a business card for towing company called Black Hawk. I figured it was a sign, but wasn't sure.

Last night I had a dream about BlackHawk, where there was one of his bust statues, and it exploded... but not in a bad way. It wasn't like it blew up into pieces.... there was like an explosion of light coming from it... I'm not sure if it was "light" per se... but some type of spiritual force around it which emitted outward.

I know that Black Hawk can be served in order to connect with your native ancestors. And I thought I saw a page devoted to him on the lucky mojo website, which I can't find now. But I was wondering what sort of information anyone has on Black Hawk... or if this is a spirit someone works with... what sort of things does he help with?
Top

This might be in the information on Black Hawk you were thinking about, it is from the Archane Archive, part of the Lucky Mojo site family:
http://www.arcane-archive.org/occultism ... hawk-1.php

Any information concerning the bucket, or any other aspect of working with Black Hawk, would be much appreciated.

I recommend that you get a short reading with one of the AIRR readers (http://www.readersandrootworkers.org/in ... Black_Hawk) who specifically work with Black Hawk...I have linked it here, you may request a consultation with that purpose. Good Luck in your findings.
I am proud to be a Lucky Mojo Forum Moderator
Top

Regarding whether it is a "sign" to see the name Black Hawk:

Black Hawk has been a respected name in America for many years and has been used in many ways, especially for commerically distributed products. For instance, here is a label from my collection: And here is another label from my collection: As a basis for working with Black Hawk in the context of Spiritualist church services, i strongly recommend the 1995 book by Jason Berry called "The Spirit of Black Hawk: A Mystery of Africans and Indians." This contains the material about the Spiritualist Church services for Black Hawk upon which Starr drew for her inspiration.

BOO-SPI-SPBH
The Spirit of Black Hawk by Jason Berry
$20.00 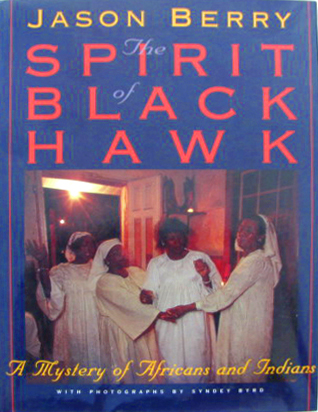 You can order from right here in the forum by clicking the blue Add To Cart buttons.

Both Starr and i at AIRR work with Black Hawk and can tell you more. For me this would not be a reading, but would come under the heading of Rootwork Advice and Magical Coaching.
catherine yronwode
teacher - author - LMCCo owner - HP and AIRR member - MISC pastor - forum admin
Top

In addition, here is a page at AIRR which i wrote about working with Black Hawk.

You cannot go wrong with either of these two fine rootworkers. I know that I personally have had magical coaching by Starr and Miss cat and I have to say they are immense resources of knowledge. They are down right amazing.
ConjureMan Ali - HRCC Graduate #1550, Forum Moderator, and Member of AIRR
Top

Sorry it took me so long to get back to this thread. My thanks to all for your information and recommendations. I'll let you know how my further explorations go.

Actually on my paternal grandmother's side of the family, we do have native ancestors, from the Black Foot tribe. Its really funny because i have been thinking about Black Hawk a lot lately... and he is located in Wisconsin and the Black Foot Tribe is located in the Dakotas and in Alberta, Canada... there is a slight possibility that Black Hawk, being so close to Black Foot region could have either known my ancestors or been a distant relative. I mean, he is repeatedly coming to me in dreams... and i am hearing, seeing the words "Black Hawk" everywhere.

Black Hawk was a warrior and the Black Foot tribe consisted of supreme warriors, some of the best among the indian nations. And this is why their reservation is so big.

I am actually going to get a mediumship reading soon, and I will bring up Black Hawk and see if perhaps he has a message for me.
Top

Just a note about the tribal term "Black Foot" -- This is NOT the same as the Blackfeet tribe of the North Central plains (the Dakotas and Alberta province). The Black Foot group is a non-federally recognized sub-group of the Cherokee tribe which was originally Georgia, the Carolinas, Virgina, Tennessee, Kentucky, etc. and was later forcibly removed to Oklahoma.

The term is used often to describe African slaves who ran away from their British or American owners and joined the Cherokees as the tribe fled westward to escape British and American invasion.

Which is a sub-set of this AIRR category:

Wow thank you. I just read this post. You are dead on. My immediate ancestors ( maternal grandma is half Blackfoot half Cherokee.) I get a lot of my herbal ways & folklore from her. I felt connected to BlackHawk also. My family as you guess is from the Carolina where I now live. I knew all of this from family stories, its kind of hard to explain that to teachers in schools and to African- Americans who might not know the connection. I have family in Kansas by way of Oklahoma. Thanks for the links too
Top

Hello people, I listen to Miss Cat and Mama Starr on different podcasts. Last night, I had a dream that I went to Miss Cats Lucky Mojo Shop and bought a statue of BlackHawk. In the dream I asked her if he will protect me. Then, Mama Starr came out and told me to 'divine'. So I threw my rider wiate cards out and it indicated, " Yes', he will work for me. Then in the dream Mama Starr was telling me all about BlackHawk but cant remember. Is this a 'garbage' dream or the real thing ??? The only thing I need help with now, is alcohol abuse....perhaps BlackHawk is coming to me for other reasons, or, to help me through this ??? Any input would be nice. P.S. In the past I often thought of doing a BlackHawk bucket but never did.....

Mama Starr is a great teacher of how to work with blackhawk and has a whole book she wrote dedicated to how to work with him. I think it is sold on lucky mojo otherwise you would have to go to her site. I would actually get some magical coaching from momma starr to learn how to further work with him.

And no I Dont think this is a garbage dream...he wants to work with you and probably is telling you to contact momma starr to help you.
Thank u St. Martha for everything you have done on my behalf.
Thank u St. Elena! I appreciate your great help.
Thank you St. Peter for opening the gates&roads!
Top

Your post has been merged into the thread called Working With Black Hawk were you can find some useful information.

Hi Rachel, I third the sentiment that this dream is telling you quite clearly to begin working with Blackhawk & to have Mama Starr help you.
In Service,
Miz Zola
HRCC Graduate #1176G
Top

Once again, i strongly recommend the 1995 book by Jason Berry called "The Spirit of Black Hawk: A Mystery of Africans and Indians." This contains the material about the Spiritualist Church services for Black Hawk upon which Starr drew for her inspiration.

BOO-SPI-SPBH
The Spirit of Black Hawk by Jason Berry
$20.00

I just wanted to acknowledge that since joining the LMCC forum and committing to honoring the gifts of my ancestors and moving forward in my spiritual development all kinds of energy has begun to move for me. I have just signed up for the course from Momma Starr and ordered some Indian Spirit Guide Oil (among other items)

to get moving on the required purchases for the LMCC correspondence course!

Thank you to ALL of the LMCC community.
Top

I feel that Blackhawk has been trying to reach me. I first heard about Blackhawk and still never knew the full extent of his work except that he was a spirit guide, this was nearly 8 years ago. But these days I find myself increasingly attracted to native culture, I made a Mi'kmaq friend who teaches me astrology and some native lore, he's doesn't know much about him. And my estranged partner is deeply involved with native culture, his subcontract is native owned, he knows nothing except that he decorates himself with haida and maori tattoos. I first became attracted to Canada when I was around 15 sitting in French class, I have since moved to Canada and of all places I suspect that I have migrated to Mohawk or Ojibway territory. I suspect I am 1/32 of one of the two bands. Anyway... I have ordered LM Indian Spirit Guide oil and incenses from the Feb special on the newsletter, not sure why I was just compelled to do so. The info on the AIRR page says he is called upon for court case matters. Which is something I seem to have some trouble with, I wonder if he is revealing himself to me to work for me.

What would you suggest that I do to honour him and welcome him? I

I have began to gather materials for an alter to him, a smallish one. I think I need his help to be a look out or maybe help with causing some confusion for those people who are in opposition on my court case. I have some buffalo teeth, arrow heads, sand from the beaches of new zealand, I have some toe nails of the estranged partner, 500ml galvanized pail and a silver charm of an indian chief it's on my bracelet, because I don't have a bust right now unless I sculpt one. I also have many scout pennies. Probably need a feather, a peace pipe and a bow or tomahawk to complete it. Strangely most of these things, except for the charm are in the corner of the house where the alter would go. Looking for a photo of Martin Luther King and another one for St. Michael. Read that there is a spiritual trinity when you work with Blackhawk and include MLK and St. Michael. Been attracted to MLK lately too, and St. Michael is almost everywhere I turn. What do you think and is there something more that I should be aware of?

Thanks very much!
KittyLove
Thank you St. Michael for keeping us safe!
Top

Hello, KittyLove,
First, have you read through this entire subforum? There's a lot of information here.
Also, you may want to see if an AIRR member can give you magical Coaching on this. I believe that Mama Starr works with Black Hawk: http://readersandrootworkers.org.
And yes, you can mix the laws keep away with the Indian Spirit oil.
Wishing you the best
Take care
HRCC Graduate #1631
Top

Those who work with, petition, or venerate Black Hawk may be pleased to know that Rev. Jon Saint Germain has opened a new Black Hawk Chapel at his Divine Harmony Spiritual Church. You can hook up with him through the Divine Harmony Church listing at AIRR: