I bought some healing bath crystals to help rid myself of some past baggage in my relationship. I have never done a bath before and would appreciate some guidance as to how to do it properly. Thank you!
Top

I checked the actual page for the spells for the healing line of products, but it's still blank so I'm asking over here...what's the proper way to dispose of healing bath water? I'm assuming I don't want to throw it away at a crossroads as I want the healing to stay with me....so pouring some in my back yard? Front yard? I know I need to wash upward during the bath to draw the healing to me, but any other tips anyone can offer?
Thanks and Praise to Dr. Hernandez, St. Jude and St. Anthony for all you have done, and continue to do on my behalf. My eternal thanks to you for your many blessings!
Top

There is no one proper way to dispose of bathwater that is meant to assist you in drawing in a positive condition (like healing). I have been taught that you can dispose of such water by going to a cross roads, standing with your back facing east and the rising sun, and throwing the water over your right shoulder murmuring a prayer that the positive condition, ie: healing, wax and grow as the sun grows in strength. You could also dipose of it in your back yard, when I do that I like to work with a favorite tree that is growing lush and beautifully, asking that the positive condition take root in my life as the tree has taken root in the earth. There are many different ways you can approach this.
Blessings,
Bri
Miss Bri-Reader-Rootworker-Founding member of AIRR
Top

Thank you for the tips, Miss Bri. I don't have a tree in my yard, but that gives me ideas of phrasing and whatnot. Much appreciated!
Thanks and Praise to Dr. Hernandez, St. Jude and St. Anthony for all you have done, and continue to do on my behalf. My eternal thanks to you for your many blessings!
Top

I still have at least a hundred pages to write -- sorry i am behind on the healing page.

You can read more about bath water disposal here --

-- but basically you've got the right idea -- you want to keep healing bath water remnants near you, so disposing in your yard would be fine.
catherine yronwode
teacher - author - LMCCo owner - HP and AIRR member - MISC pastor - forum admin
Top

Thank you, Cat. Thought I was on the right track, but just wanted to double check.

And although we'd all love more online pages from you, I think everyone here understands you are a very busy woman. You're gracious enough to share you gifts and knowledge as much as you do, and we certainly do appreciate it and you!

I would dispose in my backyard for the healing to 'stay with me.' Good Luck Maljen.
I am proud to be a Lucky Mojo Forum Moderator
Top

I want to give a testimonial for the Healing Crystals that I purchased last September from LM. Long story short, they work and work well.

Actual story:
I've been seeing a woman for almost two years who has an autistic non-verbal son who recently started school. Although the school he attends has a special needs program, because he's non-verbal it was pretty tough going at first for him (and his mom). He knows some sign language, but mostly when he tried to speak it wasn't intelligible at all unless you know him well like his mother does. Even at that, even she sometimes had trouble understanding what he was trying to say. It was frustrating to say the least, especially for him.

Because he was having so much trouble communicating, I took it upon myself to lend some assistance. I've been practicing magick for a few years, but I had just gotten familiar with hoodoo and wanted to explore it. My purchase of the healing crystals was my first-ever purchase from LM.

I created a paper talisman for him, and charged it along with the Healing Crystals in a ritual that his mom and I performed. I believe this was her first time doing anything like this, as she is familiar with magick only as a result of dating me. I asked her to join me in the work because I figured I could add her love energy, concern for him, and sincerity to give it more power.

In my personal style of magick, I typically work with a few different angels depending on what I need, so I petitioned one of them (Rehael) to assist. He instructed me to have his mother chant his scripture (Ps 30:10) while sprinkling the crystals into his bath water. We hid the talisman in his bedroom under his mattress, and waited for the results to manifest. He began making a more concerted effort to speak within that week. He said "mom" for the first time the following week.

Since then, he talks almost non-stop, and much better than before although not with perfect clarity just yet. The speech therapist at his school says he is now speaking at an 11-month-old level (he just turned 6). At the time of the working, he probably only had 1-3 simple words in his vocabulary, none of which I could personally make out. He now can say well over 20 words not even 6 months later, all of which are intelligible (with some effort). The workers at the school are amazed at his progress, and so is his extended family (none of whom has any idea what we did for him). He can now say "dad", and he's working on being able to say "grandma". He couldn't say ANY of those words before. He's been adding about one word per week since then to his vocabulary.

I'm glad there is a resource like LM with such quality products and knowledgeable staff. I've just placed a second order recently, and plan to be a longtime customer. Thanks Lucky Mojo!
Top

What a great testimonial! Thanks for sharing. I've had great success with Healing and Healing Miracle products myself

Good for you!
working-with-raphael-the-archangel-t5698.html#p32659
http://readersandrootworkers.org/index. ... el_Raphael
Thank you for sharing!
Work the Lucky Mojo products for you and for those that you hold dearly!
HRCC Grad-Apprentice #1606
Top

This is utterly amazing and beautiful! I hope you'll continue to renew this work for him, what a lucky child to be surrounded so by love.
Top

Thanks for sharing this wonderful story.

An amazing story of love and concern for a child. I am so happy to be reading this successful story of the healing crystals you purchased from Lucky Mojo.
Bless you many times over and may those blessings be returned to you 10 fold!

Thanks all for your kind words. I'm glad that Rehael heard us and moved on our behalf.

My girlfriend's son is in much better spirits overall since being able to communicate more, so I'm glad I was able to help.
Top

See the new Healing Bath Crystals labels, with helpful information on how to use all of our Lucky Mojo Healing products, here: 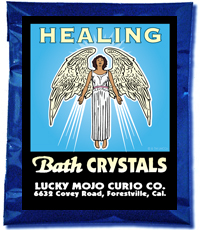 You can order right here in the Forum by clicking on the blue Add To Cart button.
Leah Rivera - HRCC Graduate Apprentice #0896
Top

I did a healing bath this morning and I think I made a boo-boo. I've read that you're supposed to dispose of some of the bath-water at a crossroads over your left shoulder. Well I was trying to find a crossroads I wouldn't visit again any time soon so I took a bowl of the bathwater in the car with me and was trying to be very careful not to spill any of it. Of course, on the way to the car my flip flop caught on the walkway stone and I tripped and spilled a small bit of it on myself and the walkway. Then on the drive there almost all of the bathwater spilled over in my car. I wasn't even going over a bump or harsh turn at the time. It was almost as though someone picked up the bowl and turned it over. Very odd. Anyway only a very small amount made it to the crossroad and I did dispose of it. Just wondering if this is going to cause me any problems and should I do some kind of ritual cleansing of my car? Or since it's healing bath water will it be ok? Please help, I'm sort of freaking out right now. Thank you in advance!
Top

DON'T freak out! You're fine. But, the intention of the bath ritual will be a lot weaker.

Just do the bath over.

This time, put the water in a sealed container.

Thank you for your response! I will absolutely do that.
Top

Return to “Baths and Washes in Hoodoo, Rootwork, and Conjure Spells”