Okay, so there's this girl that I really like and that by all accounts also likes me.

She is, however, also conflicted - she's engaged to be married to a gay man.

I have several gay friends who are also into various aspects of magic and paganism so they had the idea of using Separation Powder on them so that they would end up not making each other miserable further down the line.

I also have another friend, a male one, who has been in a toxic relationship with another woman. I laid Separation Powder for both of them (in his shoes, on her car, on the same night and at the same place) -- and now she's confessed to having some mild feelings for the other guy !

I think I might've done it too close or something like that. I didn't use any spells per se, I just put the powder in the places where they would be exposed to its influence, for reference.

Anyway, my other friends and I have come up with this planf:

1. Apply Separation Powder between the girl I like and my male friend for damage control (already done).

2. Apply Break Up Powder to both her relationship with her fiancee and the other guy when it arrives, using one of the spells on the LM site (I was thinking of using the broomstraw spell under the Separation page but with Break Up instead; any ideas on this?) and sprinkling it in various places. Do I need to heat the powder in any particular way, like with the Psalms or other Bible verses, or would it work as-is? Any suggestions as for verses? Not too versed in my verses

3. I got the Love Me spell kit. I'm going to follow the directions as closely as possible and hit her with everything I've got. As another note, we all work at the same place so there's not really anything stopping me from laying tricks down here and there - for example, Love Me Powder attuned to her in the place where we spend the bulk of our time.

4. I'm also going to be doing one of ConjureMan Ali's spells to overcome resistance in a lover (the second one involving the figure candles and the herbs).

Can anyone think of anything else that I might be missing, or maybe some way to improve this? I know she likes me as well, I can't begin to count the number of times I've caught her just staring at me, but if there's anything that would encourage her to talk to me more that'd be great (she's kind of shy).

Thanks to anyone who chips in. I really like this girl and I'm willing to do the work for her!
Top

First, LM products are prayed over when they're put together, so there is not a need to "heat them up" or "charge them" or anything like that. Just clearly state/focus on your specific prayer, wish, or intention when laying your tricks or doing your work. However, if you want to use Scripture, Psalm 3 is recommended "To Break Up A Love Affair" in Henri Gamache's work. Also, Song of Solomon chapter 6 is recommended "To Win the Love of a Woman" in the same text.

Second, my Hoodoo experience is that more "stuff" doesn't always equal better results; in fact, the opposite is often true. A Separation work focused on her and her fiance, followed up by the "Love Me" kit for you and her sounds like more than enough to me. It may even just be enough to do the "Love Me" kit. I'll defer on that to the more experienced rootworkers here. I'm still a student myself.

On another note: how sure are you of this guys sexuality? Is he in the closet? Does she know? As a gay man myself, that sparked my curiosity. If he's in the closet, some product for clear thinking or self-awareness could be added to anything you lay on him. The Solomon Wisdom formula is what I have experience with. But, like I said before, my Hoodoo experience is that despite our eagerness we should avoid overcomplicating the work.
Hoodoo Rootwork Correspondence Course Student #1816
Top

First off, thanks for letting me know about the LM products! I didn't know that about them. I may use the verses anyway for any extra oomph, though, I could definitely use all the help I can get.

As for his sexuality, I'm very sure. He is, according to my gay friends, actually active in the community (but not "active," at least not yet, thank God). As far as we know, he knows exactly what he's doing - it's entirely possible he's just looking for a beard for some reason, so I'm not inclined to be terribly nice to him. That said, my main focus is getting the girl, so all that really means is that I'm not going to attempt to curse him OR help him out.

As for the rest - I've learned that it's best to take problems with a multi-angled approach with little overlap. She's pretty conflicted in her feelings for me, so there's the resistance reducing work; there's also the Love Me stuff to strengthen the feelings she has. The Break Up work would be to help keep the waters unmuddied by, well, breaking her up with her fiancee and also helping to get rid of my competition. That's how I do things, anyway; if this wouldn't necessarily work in a hoodoo context I'm more than happy to defer to someone who's more experienced in this.

Thanks for your input!
Top 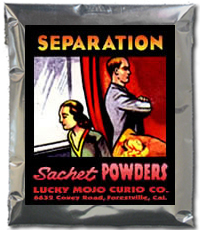 You can order right here in the Forum by clicking on the the blue Add To Cart button.

My married boyfriend who I have been with for 7 years wants to get out of his marriage terribly.
He doesn't really know much about hoodoo but asked me if there was anything he could do to get her to peacefully give him a divorce. He has tried and tried and she keeps hanging on. I am thinking of giving him something simple like some separation powder to sprinkle in her shoes etc. He of course has to be discreet. I don't want to do anything because I have turned it over to God. But if he wants to do it so be it.
Any thoughts?
Top

But, have you considered performing spells for him?

If I do a spell for him since he really wants out would that be something I would need to cleanse myself after? Would it be consider negative work I guess is what I'm trying to say.
I have bought separation powder and used it to get out of my marriage and of course with the determination to get of it and it worked. I lite a couple of vigil light also.
Top

Hello, smiling7, I'd say yes you should cleanse yourself with hyssop after you do separation work, because you'd be splitting up a union that has been blessed by God.

You can find hyssop here: http://herb-magic.com/hyssop.html

Also, you mentioned in a previous post about this topic that you didn't want to do any work on this matter. If your desires don't match your intentions, that could be a problem for your spellwork. Perhaps it would help to get a reading on the situation, and there is a list of reputable readers here:

Good luck to you.
Thank you saints and spirits!
Proud member of AIRR and Hoodoo Psychics!
readersandrootworkers.org
Top

But if he does it himself with separation power and ask for her to let him go and only wish her the best would he need to cleanse himself since it's his union not mine?
Top

He should. But, many people don't.

That's up to him

He could also anoint himself with the Hyssop oil if he doesn't want to bathe (make sure he cuts it with almond oil because this is pure essential oil and that can hurt the skin if applied without diluting it in the carrier oil...almond oil).

Well here I am again. My married boyfriend (of 8 years now)used the separation powder and told his wife and 2 adult children he wanted a divorce. The wife agreed but then came down with breast cancer. She is ok and only had radiation done. It was very small and she is now cancer free. They are in big financial debt and have to sell their expensive house and have huge students loans,and owes the IRS a pretty large amount and so my boyfriend says he can’t leave until the house sells. I have lost my patience with all of this and feel like giving up. I do love him but I feel like we are just doomed. I have stopped seeing him but we still email and talk on the phone. He puts pressure everytime to see him. I just can’t at this point. I have done several love spells and even a couple of breakup spells. I have kept the remnants of the love spells at home but wonder if I need to do something with them and try with everything in me to just get over it. Any suggestions are appreciated. Also my Mother is a gifted psychic and she says just stop seeing him and if he truly wants to be with you he will get free. She doesn’t practice hoodoo though so I can’t ask any advice on that to her.
Top

It sounds like you really need a reading on this. That being said you have put a lot of effort into the situation and getting this man to leave his wife but just want to give up at the appearance of another delay. It leaves a question for me if you really have thought all this through and haven't perhaps inadvertently tied yourself up to this man. However, I agree you need to cut and clear. Dispose of the love ritual remains in running water and walk away (Don't look back). Go home and do a black walnut bath and be free.
Student #2128
Top

You know I have wondered if I have gotten tied up too. I have a nations sack on him and maybe I am under the spell too. Maybe I need to get rid of everything including the Nations Sack. It has worked well but he just has drug his feet for too long now. Honestly the main reason I have stayed is he reaches out all the time and the sex has been incredible and he constantly is telling me how much he loves me. Although actions speak louder than words and he has done very little and I have given up everything to be with him. Also I have money and he does not! I agree I need a reading and some advice. Thank you for your response. Any recommendations for a reading?
Top

You can find reputable readers here:

Return to “Sachet Powders in Hoodoo, Rootwork, and Conjure Spells”