Thank You, Brother Christopher at AIRR and HP

How to contact AIRR or HP for an authentic hoodoo psychic reading, conjure consultation, or magical coaching, and how to hire a root doctor.
Post Reply
First unread post • 9 posts • Page 1 of 1

Thank You, Brother Christopher at AIRR and HP

We are happy to announce that Brother Christopher, a long-time Moderator at this forum, is now a full-fledged member of both AIRR and Hoodoo Psychics. Use this thread to post your testimonials about his readings and rootwork.
catherine yronwode
teacher - author - LMCCo owner - HP and AIRR member - MISC pastor - forum admin
Top

Welcome Brother Christopher and congratulations for being accepted into AIRR and Hoodoo Psychics! The forum is delighted to have you around and lucky for your expertise.

Happy Tuesday!
As Tuesday is the day of Mars, it is a day to start spells for Victory, Power, and Triumph. It is also a good day for Blockbuster spells that powerfully break through obstacles and challenges. It can also be used to promote courage and strength of character, as one of the qualities of people who are Martial influenced is to be Courageous, assertive, Magnanimous and direct. If those are qualities you are look for, calling upon Mars while doing these types of spells can be a great benefit.

Happy Tuesday!
The fixed stars are probably the best and yet least well known aspect of astrology. By fixed, it refers to how these stars don’t move in comparison to the planets or the sun and the moon, which constantly shift across a relatively static background of the stars. Yet it is the fixed stars that are what make makes astrology so popular. From the zodiac upon which people base their identities such as being a Taurus or a Sagittarius, to the other constellations that slowly revolves across the sky like Orion the Hunter or The Big Dipper and Little Dipper to the individual stars themselves like Polaris, the North Star, which helped people guide themselves at night, even across the ocean, to stars that are only known to astrologers and astronomers like Algol, the Demon Star, placed in the hands of the constellation Perseus, as the the head of Medusa, the only mortal Gorgon that he slew in order to rescue Andromeda, figures of myth whose stories have been preserved in our stars and constellations. Of course, this is no different from other cultures who have done the same. Like the planets, the signs of the zodiac, constellations, and even individual stars have played a role in magic to help people achieve what they desire in life.

The Primum Mobile is a latin phrase for “First Mover”. It refers to the very edge of existence, which actually gives motion to the rest of the cosmos. Beyond the Primum Mobile is the Celestial Kingdom, Heaven, where God and his Angels dwell. At least, according to the cosmology of the Middle Ages and the Renaissance. At one time this was thought to be astronomy, but as the geocentric model of the world, with the earth at its and the succeeding spheres of the other planets around it, like the thin layers of a perfectly round pearl, was replaced by the heliocentric model of the cosmos that we use, we can still use the geocentric model as a spiritual map to interact with the spiritual cosmos, each successive realm giving way to the next, slightly more spiritually refined, and possessing different virtues and challenges that can help to ennoble us and become more evolved and realized beings. The Primum Mobile in that sense indicates the boundary of human and divine. Crossing over it one leaves behind the physical realms completely and crosses into supernal realms of the cosmos.
I will be online today for psychic readings and spell casting advice until 9 pm Pacific Time.
Br. Christopher 1-888-4-HOODOO extension 3332
Brother Christopher, Runeworker - HRCC Graduate #1271G
Member of Hoodoo Psychics and AIRR
Top

Happy Thursday!
Br. Christopher will be only today from 12 pm to 9 pm Pacific Time at HoodooPsychics.com. Just call 1-800-4-HOODOO ext 3222

Taurus is the next sign of the Western Tropical Zodiac. It is a bull and connected to many myths of bulls of antiquity. Some say it was the Cretan Bull, lusted after by Pasiphae, the semi divine queen of Crete and the wife of Minos, the legendary king of the Minoan civilization on Crete. Her lust was part of a curse by Poseidon, who had given the bull to Minos to sacrifice to him. However Minos coveted the majestic bull and substituted a lesser one. Poseidon was offended by this act and cursed Pasiphae to lust after the bull. With the help of the inventor Daedalus, a bull effigy was built so Pasiphae could lay with the bull, and from that union the Minotaur was born. Minos was disgusted by this monstrous birth and had the Minotaur sealed in a labyrinth. He would demand payment of 14 Athenian teenagers, 7 men and 7 women, which would be sent into the labyrinth to feed the Minotaur. Eventually Theseus, future king, would enter the labyrinth, aided by Minos daughter Ariadne, and kill the Minotaur. There are many more bulls of mythology who are given to this constellation.
The sign of Taurus is a fixed Earth sign, ruled by Venus, and the Exaltation of the Moon. When those planets pass through Taurus, they are said to gain great power and virtue. Depending upon how you view the seasons, they either mark the peak of the season, when it is its strongest essence. Taurus marks the peak of spring, when it is the most “spring” time. As Taurus is an earth sign, it is strongly connected to agriculture and animal husbandry.
Brother Christopher, Runeworker - HRCC Graduate #1271G
Member of Hoodoo Psychics and AIRR
Top 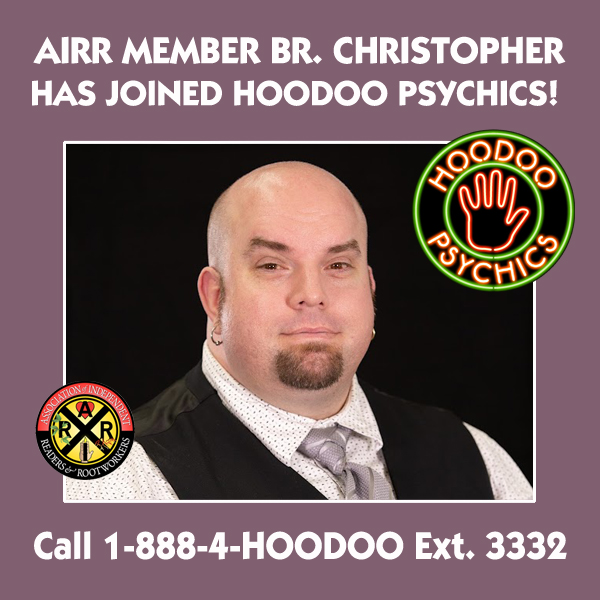 He seeks to tell the whole truth and not to sugarcoat the impact of potential bad news, believing that forewarned is forearmed. He feels that the greatest work one can have is to aspire to Wisdom, for through Wisdom can all things be attained! Call Brother Christopher at 1-888-4-HOODOO extension 3332, and get a reading for $3.99 per minute!

The English name for Sunday is a direct translation of the Roman name for Sunday, that is, the Day of the Sun. The Roman name is Sol (Greek Helios). He was usually depicted riding in a chariot across the sky, carrying the solar disk across the sky, or the light shining from his head was in fact the sun. This solar image would be later connected to Apollo, the Graeco-Roman god of music and prophecy, brother of Artemis the Huntress, who would be connected to the Moon. The sun was generally considered benevolent, and as their role as moving across the sky, all seeing, a supporter of good deeds and ethics, and the destroyer of evil. In Astrology, the sun is considered a fortunate planet in many things, and is the signifier of kings, as the sun is often considered the king of the sky. For this the sun is associated with bringing good fortune, wealth, power, victory, success and clarity. Of course, the rising and setting of the sun, as well as eclipses also have significance, with dawn being a time of renewal and beginnings, while setting is endings and completion. Eclipses signifying the blockage of solar power, a time to seek protection from the temporary gain of dark forces, often symbolized by dragons, wolves or demons temporarily consuming the sun. Midsummer or the Summer Solstice is the peak of the Solar cycle, with it reaching the latitude known as the Tropic of Cancer, the northernmost boundary of the Tropics on Earth. The longest day of the year, from today the sun will begin moving South until it reaches the Equator on the Autumnal Equinox. Working with the annual solar cycle is a beneficial way of reaching long term goals.
I will be online today June 21 for psychic readings and spell casting advice from 12 pm to 9 pm Pacific Time.
Br. Christopher 1-888-4-HOODOO extension 3332
Brother Christopher, Runeworker - HRCC Graduate #1271G
Member of Hoodoo Psychics and AIRR
Top

Gemini is the third sign of the Zodiac. Its name means “The Twins” and it is tied to some sets of mythic twins. The most famous in Western Culture are the Dioscuri, fraternal twin brothers born from Leda, the Queen of Sparta. Castor was the mortal son of her husband, Tyndarus the King of Sparta, but Pollux was the immortal son of Zeus, who seduced Leda by coming to her in the form of a swan. They had many adventures together, but when Castor died, Pollux asked the Gods of Olympus to share his immortality with his brother, and so it is said that they take turns living in the Olympus and in Hades, the realm of the dead. The Dioscuri were very popular with many people and had many temples. They were especially popular with people asking for aid in athletics, for soldiers, and horsemanship. The written symbol for Gemini is one of the symbols of the Dioscuri, known as the dokana, two beams connected by a crossbeam.
The sign of Gemini is part of the airy triplicity, and is ruled by the planet Mercury. It is a mutable sign. The mutable signs are considered changeable and capable of many variations. In some thought a mutable sign rising on the horizon is considered a favorable time to work any kind of magic, as its changeable nature makes it possible to achieve anything. As it is ruled by Mercury, It is already indicated as being beneficial to learning, speaking, and writing. Gemini also gives an indication towards sleight of hand, physical ability especially with gymnastics or dancing as well.
I will be online today June 23, from 12-9 pm giving readings and spellcasting advice at HoodooPsychics.com.
1-888-4-HOODOO Ext 3332
Brother Christopher, Runeworker - HRCC Graduate #1271G
Member of Hoodoo Psychics and AIRR
Top

Return to “Association of Independent Readers and Rootworkers, Hoodoo Psychics”