Every week Nagasiva selects a free spell for you -- it's Hoodoo You Can Do! Collect the whole set!
Post Reply
First unread post • 3 posts • Page 1 of 1 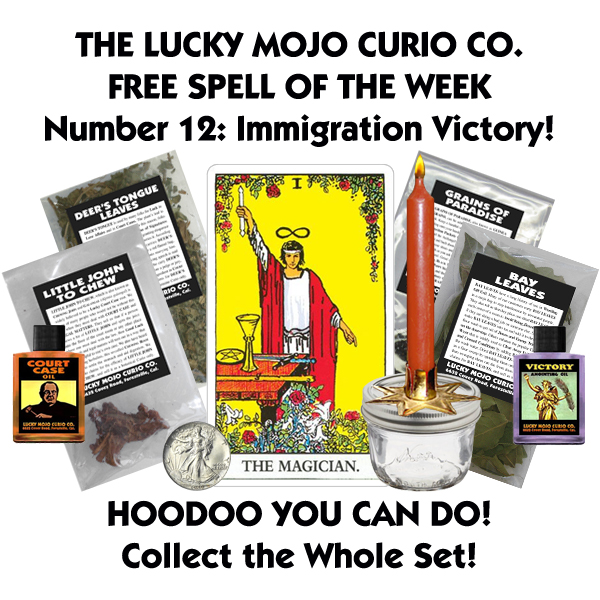 A client who is a graduate of my professional Hoodoo Rootwork Correspondence Course asked what magic to perform to move forward a "stuck" immigration case for a friend-client of hers, for which a court date had been set.

In my tarot reading, i pulled the Magician card, signifying that she was capable of doing the work for her friend and that, because the Magician is shown working with all four of the tarot suits on a table in front of him, all four elements of spell-casting -- Earth, Air, Fire, and Water -- should be employed.

Here is what you need to know about the four elements, as shown on the tarot card.

EARTH or Coins is represented by amulets, talismans, herbs, and mojo bags.

AIR or Swords is represented by prayers, written language, and by casting things to the wind.

FIRE or Wands is represented by candle magic or any work with fire.

WATER or Cups is represented by bathing, washing the laundry, scrubbing the floors, and drinking teas.

This is the spell i designed for my talented graduate student. I have marked it to show how it engages all four elements. Every part of it is traditional, old-school hoodoo. It is the kind of job a professional root doctor performs for a client, and some parts of it, such as the fixing of the coin, the making of the mojo hand, and the preparation of the sugar jar, are accomplished by the worker and delivered to the client with instructions on how to proceed from there. Each portion of the work is easy to perform, but the entire job has many "moving parts" because the client's situation was legally quite complex and had been dragging on for far too long.

This spell work should allow for considerable lead time before the client's court appearance. The fastest it can reasonably be done is about three weeks, but it can be extended for several months if the court date is postponed.

(EARTH) Have the client obtain a Walking Liberty Half Dollar. This coin, minted from 1916 to 1947, can be purchased online or in a coin shop. When the client brings it to you, explain the symbolism of the coin to him. The front of the coin depicts Lady Liberty walking towards the sunrise, symbolizing the dawn of a new day. She is carrying a sheaf of Bay Laurel leaves to symbolize wisdom and military victory, mingled with Oak leaves to symbolize stability and civil victory. Her outstretched hand represents her invitation to all people, and she imparts the spirit of liberty to those who approach her. Both of you should pray over it together (you may lead the prayers). Then ask him to give it to you to work on.

(AIR) Have the client write out a copy of Psalms 35 in his own handwriting. On the back of it have him write out his personal petition for success, naming what he desires, and signing it with his name and birth date. Set it aside and put the coin on top of it.

(AIR) While the client is there, ask him to write the names of all who oppose him on individual slips of paper. These should include all negative case workers, bureaucrats, racist politicians, representatives of ICE, or people known to you who oppose immigration on general principles and the client's immigration in particular. They might also include the names of those in the client's home country who do not want to see him succeed in the USA and who are trying to get him to fail and return to them. Place all of these slips of paper in a brass bowl. Tell the client you are now prepared to do the work and send him home with a blessing, telling him to return in three days.

(AIR) If the client lives a long distance from you, these first three steps will be conducted by phone or a meeting app, and then items will be mailed.

(AIR) One you have the items from the client, burn all of the name papers to ash, but do not powder them. Leave the petition paper on your altar, but take the Walking Liberty Half Dollar and the name-paper ashes to a crossroads. Standing in the crossroads, recite Psalms 35, then take both the ashes and the Walking Liberty coin into your hands and toss them upward into the air. Let the ashes blow away, but catch the coin, for as it says in Psalms 35 "Let them be as chaff before the wind."

(EARTH) Place the dressed coin in a small leather bag and add to it a piece of Court Case Root for victory in court, a pinch of Grains of Paradise for the client and his advocates to rise higher than others and be favoured by God in court, and a pinch of Deer's Tongue Leaf so that the client's words and the words of his lawyer and advocate will be eloquent and persuasive. Add to these a Bay Laurel Leaf and an Oak Leaf or an Acorn, because Bay Laurel and Oak are carried by Lady Liberty. This bag is a mojo you will give to the client when he returns, with instructions to carry with him. Every day he will pray Psalms 35 over it (which you may supply on a printed sheet for him). Once a week he will lightly dab it with Court Case Oil and Victory Oil, which you will supply to him.

(EARTH) Prepare a sugar jar to sweeten the court officers and authorities to the client. Place the client's handwritten petition paper in the jar of sugar along with Court Case Root that has been cut into pieces, the remainder of the packet of Grains of Paradise, and some Deer's Tongue Leaf.

(FIRE) Burn brown candles dressed in Court Case Oil and Victory Oil on the sugar jar at least three times a week, and allow the wax to build up on it. You will perform this work for the client, and be prepared to send cell-phone photos now and then.

(AIR) Get two Bay Laurel Leaves. With a Sharpie marker, write the word LIBERTY on one leaf and the word VICTORY on the other. Put these in a coin envelope to give to the client.

(EARTH) As the day of the client's court appearance approaches, open up the sugar jar and take out a small piece of Court Case Root, a few Grains of Paradise, and a bit of the Deer's Tongue Leaf, along with spoonful of the sweetener. Leave the rest in the jar. Put these in a clean white handkerchief to give to the client.

(WATER) Prepare one batch of Memphis Uncrossing Bath to send the client. (This is Lucky Mojo Free Spell No. 8 -- Uncross Yourself!).

Give the dry bath ingredients to him with instructions that on the day of the court hearing, he should rise soon before dawn, bathe with them as instructed, downward, and rinse off to cleanse himself. He should save a bit of the rinse water, dress in fresh clothing, carry his mojo hand, then go outdoors just at sunrise, and throw the water toward the rising Sun -- and as he does so, he should remember the coin charm in his mojo bag, for Lady Liberty beckons him to join her at the dawning of a new day.

(FIRE) Instruct the client that at sunrise, as he has bathed and disposed of the water, you will be lighting a brown candle dressed with Court Case Oil and Victory Oil on his sugar jar, and that you will be lighting these candles one after another, all day, and as each one burns low, you will transfer the flame from the old one to the new one and that with each new candle you will pray Psalms 31, 35, and 37 for him, until he phones or texts you that the proceedings are over for that day.

(WATER) Instruct the client that after he has bathed and disposed of the water, and while your first candle is burning, he is to boil the piece of Court Case Root, Grains of Paradise, and Deer's Tongue Leaf that you removed from the jar and sent to him in one cup of water, until the water is reduced by half. Tell him to let it cool, then taste it. Tell him that he can expect it to be very hot and spicy. Tell him that he is to strain out the root, seeds, and herb and set them aside, and to divide the liquid in half. He is to soak the fresh white handkerchief in half of the liquid and lay it out to dry.

(EARTH) He is then to wrap the set-aside root, seeds, and herb loosely in the handkerchief.

(EARTH) He is then to open the envelope of Bay Leaves and to place one Bay Leaf in each shoe that he will wear to court, LIBERTY in the left shoe and VICTORY in the right shoe.

(WATER) Tell them that as he gets ready to go to court, he is to drink the remaining herbal brew. Tell him that he may add water to dilute it and make it palatable.

(EARTH) Remind him to carry his mojo hand and the handkerchief filled with the root, seeds, and herb with him to the proceedings

(FIRE) Finally, remind the client that you will be burning candles and praying for him all day, and that he is to call you when the proceedings are over for the day.

Most of my website is devoted to simple do-it-yourself spells, but this is a glimpse at what a good rootworker can do for a client. Such a job is not cheap, so consider well if you can afford a service like this. If you do seek a root doctor to perform this or other such work on your behalf, and if it costs more than a week's wages, please ask the worker for a simple contract. The contract should specify what the conjure doctor will do to back up your work, what packages of supplies and instructions you will receive, and how many readings you are including in the package. Usually there will be several contacts: first, a divinatory reading; second, a check-in when the worker receives requested personal concerns or papers from you and is about to begin the work; then another check-in upon your receipt of spiritual supplies from the worker so that the two of you can go over your instructions; and last of all, a final consultation upon completion of the job, with a divination as to future work.

The Lucky Mojo Curio Co. has made a commitment to post 100 FREE hoodoo spells at the rate of 1 per week for two years. You can collect the whole set and learn a lot. These spells come from our web sites, radio shows, customer forum, and published books. Note that these spells are copyright by their authors and are used with their permission. You may collect them for yourself, but you may not remove the author's name or copyright notice, and you may not collect these spells for use in your own commercial ventures unless you obtain each author's express permission.
nagasiva yronwode #0000GA (HRCC Apprentice Grad)
https://www.facebook.com/nagasiva.yronwode
Top

This is an amazing spell. Thank you for sharing
Brother Christopher, Runeworker - HRCC Graduate #1271G
Member of Hoodoo Psychics and AIRR
Top

thanks for sharing
Top

Return to “Free Lucky Mojo Spell of the Week! Collect the Whole Set!”